Samsung Galaxy Note 8 is the next forthcoming Flagship smartphone device from Samsung. Still, the launch is three months away as it is expected to reveal in September 2017. But the bunch of rumors renders, and leaks are drifting through the streets of the internet. Last month we have informed you about the rumor of Galaxy Note 8’s display and dual camera setup. Allegedly, video of the front glass panel of Note 8 was also spotted on the web which was leaked by Smashleaks. A few days ago, the giant price of Galaxy Note 8 was also claimed which will be more than $1000.

Coming to the latest leaked renders which come from BGR and OnLeaks. These leaks show the setup of two rear cameras and the Fingerprint sensor spot which is close enough to the camera place. These new leaks confirm the previous leaks and rumors about the Samsung’s upcoming flagship. 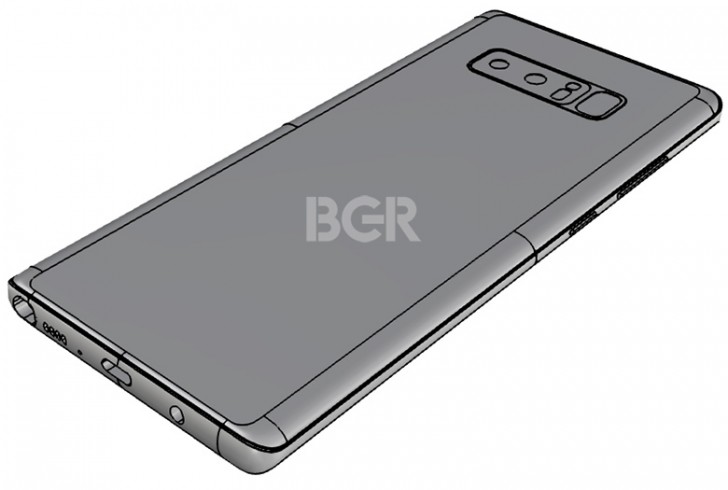 BGR shows the 3D CAD drawing image (above) of Samsung Galaxy Note 8. BGR claimed it comes from the factory where the Note 8 devices are under production. In the drawing, Dual camera setup can be seen clearly along with the fingerprint sensor. As for as I know, Note is going to be the Samsung’s first ever flagship smartphone which will have a fingerprint sensor on the back. Other smartphone brands like Huawei, Honor, and Lenovo already have smartphones with fingerprint sensors on the back side.

Let see what comes from OnLeaks which is quite famous and trusted source. OnLeaks displays the exclusive 360 video and renders of Galaxy Note 8. Bezel-less design can be seen in the renders along with other same things we have articulated above. 91mobile claimed that Note 8 will feature the dimensions of 162.4 x 74.5 x 8.4mm along with USB Type-C port. It would come with the thickness of 9.5mm.

Galaxy Note 8 renders by OnLeaks
1 of 8

According to the rumored specifications, Galaxy Note 8 will likely to come with bigger 6.3-inches display which is little larger than Galaxy S8 Plus. It will boast the Snapdragon 835 processor along with 6GB of RAM. Samsung Galaxy C10 also to come with Dual cameras setup.

So for now, that’s all we have for you readers regarding Galaxy Note 8 leaks. Additionally, Samsung launches the Galaxy S8+ in the new Rose pink color which is quite attractive for girls.