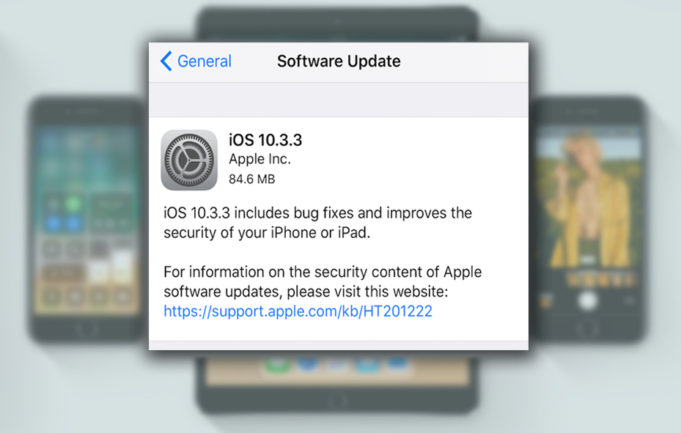 Apple’s iPhone 8 is anywhere very near to us (May be launched in September) but before this great launch, Apple is on something else. iOS 10.3 was a not a huge update for Apple users. After this update, Apple managed to release two other minor bug fixing versions iOS 10.3.1 and iOS 10.3.2. And After all this now it is time for the latest iOS 10.3.3.

After releasing iOS 10.3.2 on May 15, 2017, six beta versions were released for beta testers and developers to finalize this new iOS version. This new version iOS 10.3.3 is now available for all compatible devices. The download size of this new update is between 80-100 MB.

Official release notes for this new version labels only the improvement in security and some bug fixes. The Company shared details about a major bug fix in this new update. In this update, they have fixed an issue, which allows hackers to implement and execute code on the Broadcom Wi-Fi chip. This new version also has another noticeable change and that is new wallpapers for iPad Pro. Below is the official release note from Apple:

iOS 10.3.3 includes bug fixes and improves the security of your iPhone or iPad.

This update may be the last for iOS 10.3 version. After this, Apple Fans are eagerly waiting for the next big iOS 11. iOS 11 beta is also available and anyone with a compatible device can take part in Apple’s testing phase update.

What will be the new features in iOS 11?

Apple’s iOS 11 was announced back in June at Worldwide Developers Conference. This new update will include a new look for App Drawer, a new way to manage Control Center, Airport maps in Maps, a Do Not Disturb feature, a document scanning application in Notes, a one handed keyboard feature and many others. Have a look on some new features in below images:

Take a look at the Rumoured and Upcoming new Nokia 8