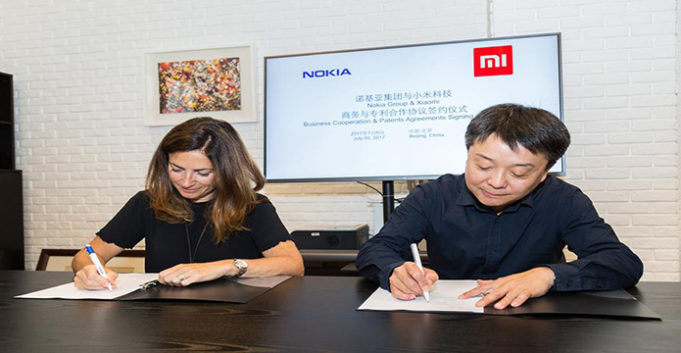 Chinese tech giant Xiaomi is famous for its high quality and reliable products and well known Nokia join hands for using each other’s patents. Especially, this worthwhile deal could be beneficial for Xiaomi who is facing difficulties in the international market regarding patents issues. Reportedly, Xiaomi was on the number 5th right after the Apple in the year 2016 with 8.9% market shares. According to IDC, Xiaomi shipped the 41.9 million units throughout the year of 2016.

Talking about this deal, Vice President at Xiaomi has said:

After months of negotiations, we finally achieved this win-win IP partnership with global technology leader Nokia. This reflects the deep respect Xiaomi has for intellectual property rights. It is a significant milestone for us in our globalization journey and will take us further as we deepen our business in more markets. I am so proud of our phenomenal team!

Ben Wood (Analyst for CSS) has expressed his views about this deal. He said: this deal was much needed for Xiaomi if Xiaomi is serious about its expansion in the international market.

Deal struck between @Xiaomi and @Nokia over patents. A much needed milestone for @Xiaomi if it is serious about international expansion. pic.twitter.com/BKbvqQqFFZ

Best of luck to the both, Nokia Xiaomi and we hope this collaboration will help the both companies for their growth. Furthermore, Nokia announced the partnership with ZEISS, a German manufacturer of optical systems.